For many decades, the role of suspension springs in Motorsport had been overshadowed by the complex nature of the damper (shock absorber) when in fact, the entire suspension system is focused around the duty of the spring.

The responsibility of the spring is two-fold. It dictates the height of the vehicle, thus affecting the CoG (Center Of Gravity) and roll dynamics. It also controls the speed and distance the wheel travels over the driving surface, which translates to vehicle control and mechanical grip.

In early Motorsport, a single linear rate spring was used as the solution to most suspension configurations. As technology progressed, the Schmitthelm Super Progressive (multiple-rate) spring was introduced to the Formula 1 field to allow the compliance needed over rough road surfaces but also offer the roll resistance needed when cornering. Though the technology was a great step forward, it was still flawed. As a single spring, it did not allow engineers to tune the initial or final rates to the various conditions of each track.

After seeing a need for this dynamic spring tuning, in the early 80’s Wilfried Eibach launched the first line of ERS springs. Designed as a multi-rate spring system, the ERS System allowed engineers to fine tune the initial, combined and final rates of the spring through a series of Tender and Main springs.

Over Thirty years later, the ERS program has grown to over 1500 single springs and components and has branched out to all forms of motorsport becoming the worldwide leader in Race Springs and Race Spring Systems. From the 24 Hours of Le Mans to the Baja 1000, engineers and grassroots racers alike have come to rely on the dual-or multiple rate ERS System to get them to the top of the podium. 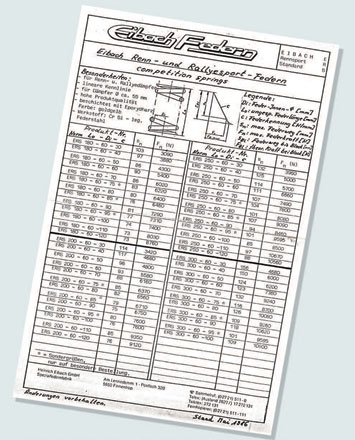 Off-Road racing was one branch of Motorsport which required special attention to spring lengths, inner diameters and rates that were not commonly found on road race vehicles. Thus, the Eibach Racing Off-Road System (ERO) was born. ERO is a comprehensive system of springs and accessories using the same ERS dual spring philosophy. This selection provides copious lengths, rates and diameters to produce the perfect multi rate suspension combination for any off-road environment.

APictured is a single spring featuring tapered wire at one end of the spring. Through this tapered wire, a softer initial rate/characteristic is achieved. This is a more sophisticated spring type than (figure b). but also has major deficits. As mentioned above, a single spring limits the level of fine tuning required in this dynamic (off-road) environment for optimal traction and handling. The use of one single spring means no tune-ability.

BOne single piece spring, progressively wound with more coils and lower pitch on one end. By adding more coils on one side, a softer initial rate characteristic is achieved, but causing major deficits. Extreme spring lengths will cause the spring to buckle through the range of travel. This translates to inconsistent performance, irregular component wear and even failure. The use of one single spring means no tune-ability.

CDual- or Multiple-Rate ERO Systems use proprietary super-high tensile alloy and manufactured to the industry leading tolerances. Thiese systems use a series of springs to achieve both maximum travel and tune-ability. With thousands of different spring configurations available, the exact characteristics can be achieved.

DDual- or Multiple-Rate ERO Systems use proprietary super-high tensile alloy and manufactured to the industry leading tolerances. Thiese systems use a series of springs to achieve both maximum travel and tune-ability. With thousands of different spring configurations available, the exact characteristics can be achieved.

Utilization of a multi-rate system allows complete control over the combined rate, the final rate and their transition(s). This is an optimal solution for the extreme conditions found off-road. Though dual rates are most often found, there are some scenarios where a triple rate is the best solution. For this particular exercise we will review how the dual-rate system works.

Spring Rate is defined as the amount of force required to move the spring a given distance, which means a 100lb/in spring will travel 1 inch for every 100lb of force exerted on the spring.

The demonstration above (Figure1) illustrates two 100lb/in springs stacked in series as a dual rate system with a combined rate of 50lb/in. The misconception is that the first spring will carry the entire load before the second spring begins to compress. This is untrue. Each spring will still move one inch for every 100lb of force. This means that in total, the stack will travel 2 inches. Taking the 100lb of force divided by 2 inches of travel equals a 50lb/in combined rate. 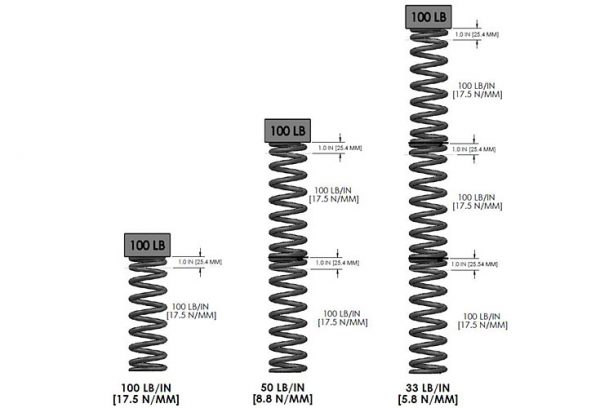 Because vehicles vary in weight and road conditions are never constant, the springs used in a dual spring system will differ for optimal tuning of the chassis and will not always share the same rate. The formula below illustrates the method used to calculate the combined rate of the system.

Once the combined rate is decided, the rate transition must be taken into consideration. There are two ways to achieve this transition. In the first method, the softer upper (Secondary) spring is allowed to coil bind or block. This is the moment of transition to the Primary spring’s characteristics alone. To calculate when the transition will occur naturally, the following equations can be used:

The second method is to utilize a forced transition. This is most commonly achieved with a stop ring. The stop-ring threads on the shock body allowing the tuner to adjust the point at which the slider (spring coupler) makes contact and stops the compression of the secondary spring. This is superior as it allows for the tuner to select from a vast range of transition points, thus creating the most efficient use of the travel. (Figure 3) illustrates the function of a dual rate assembly with the aforementioned stop-ring. 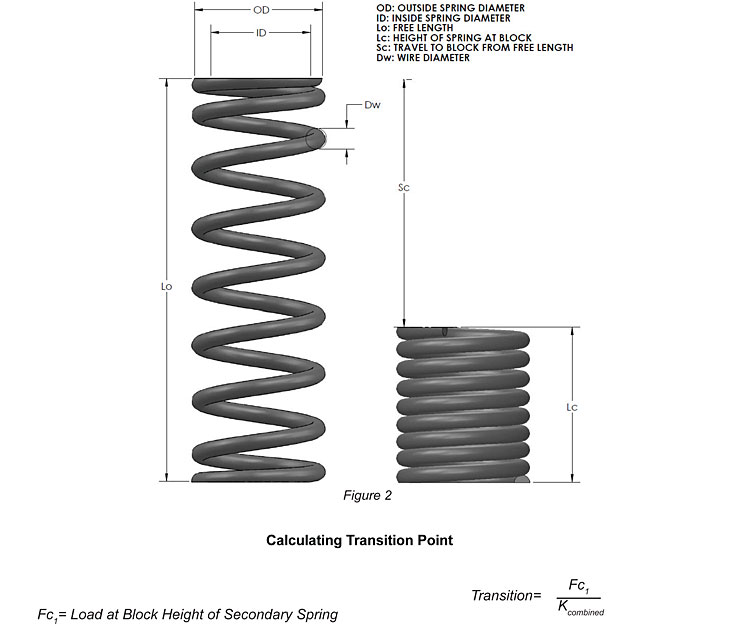 When testing a new system configuration, it is essential to allow enough travel to avoid blocking both springs before the shock reaches its fully compressed (bump) state. These two methods of transitioning rates allow for an infinite number of rate and travel combinations. Below are several graphs that demonstrate the tunable characteristics of a dual-rate system. 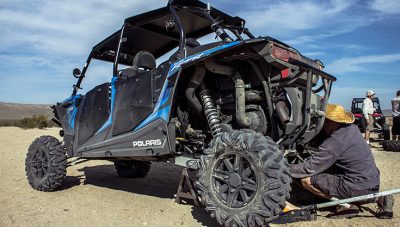 (Figure 6) illustrates a dual rate combination with a 10″ 200lb/in spring stacked on a 16″ 300lb/in spring. The graph shows that the secondary’s increased rate from (Figure 5) moves the transition further into the travel. Due to the increased rate of the secondary spring, the spring reaches its block length further into the systems travel. This results in a larger first rate but more travel before that rate reaches the transition point. This firms up the initial rate for smaller to medium bumps; which then transitions into the stiffer rate later in the travel for the larger jumps or full compression scenarios.

This last graph demonstrates a 10″ 300lb/in stacked on a 16″ 300lb/in spring. The three different rate curves show the effect that the position of the stop ring has on the transition of the rate. Notice that as you decrease the travel of the secondary spring (block the initial rate out sooner), the travel of the overall stacked system decreases. Comparing the curves side by side demonstrates the control that a proper dual-rate combination provides over travel and rate transition. 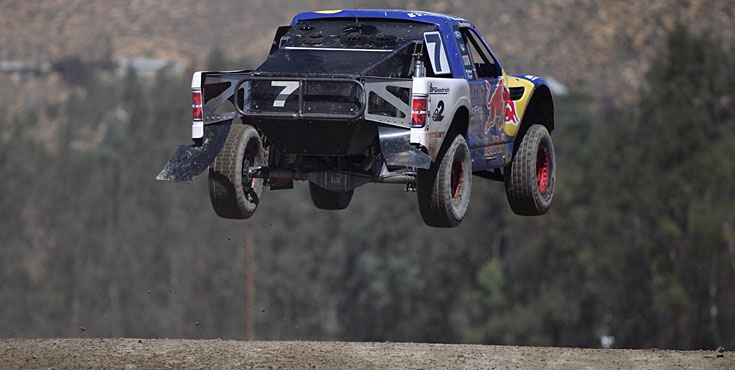 Stay tuned by subscribing to the newsletter.

An error occured during your subscription. Contact us to get more details.

Thank you for subscribing.